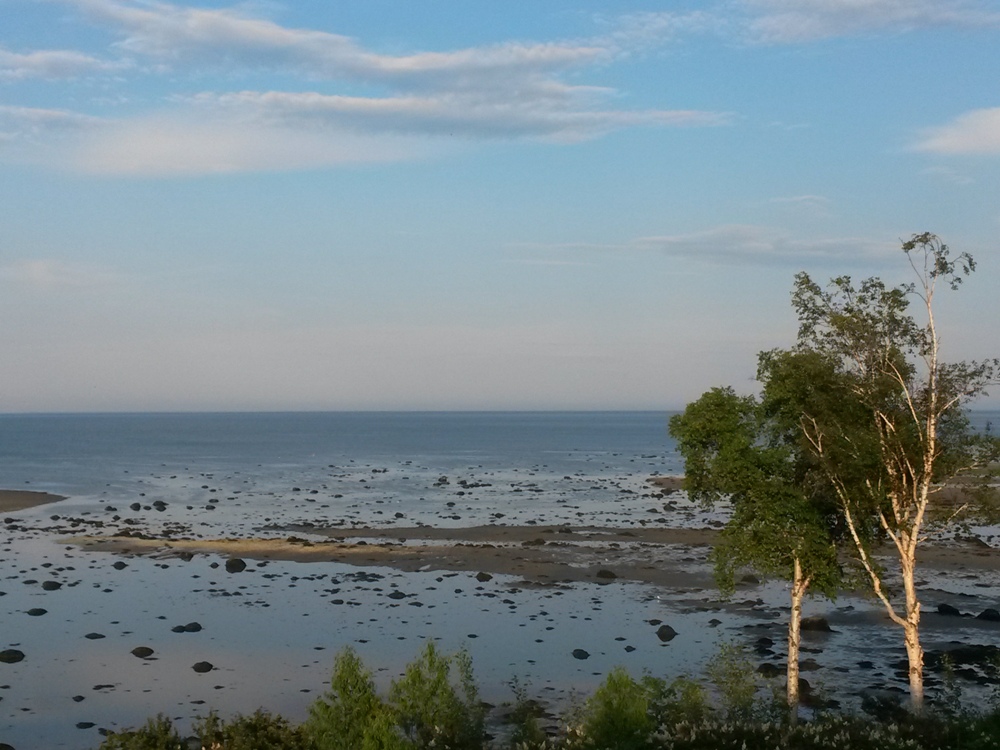 Different than announced it is not Part 3 of our Quebec trip. Although it was part of our trip. This time I come up with a story, many are afraid of to happen. I choose to make a post itself to show you, hard times are there to get over them.

Regarding the fact we didn’t see as much as planed at Lac Saint Jean , we planned to stop at the village of Sainte-Rose-du-Nord. It was meant to be cozy with nice European style houses, kind of an artists village and at a fjord. We drove down to have a snack stop. As it was still raining we quickly took a few photos and jumped into one of the restaurants.

I was surprised by the beauty of nature. I enjoyed standing there and let my eyes wander. However it was all grey in grey it had it’s own spirit. 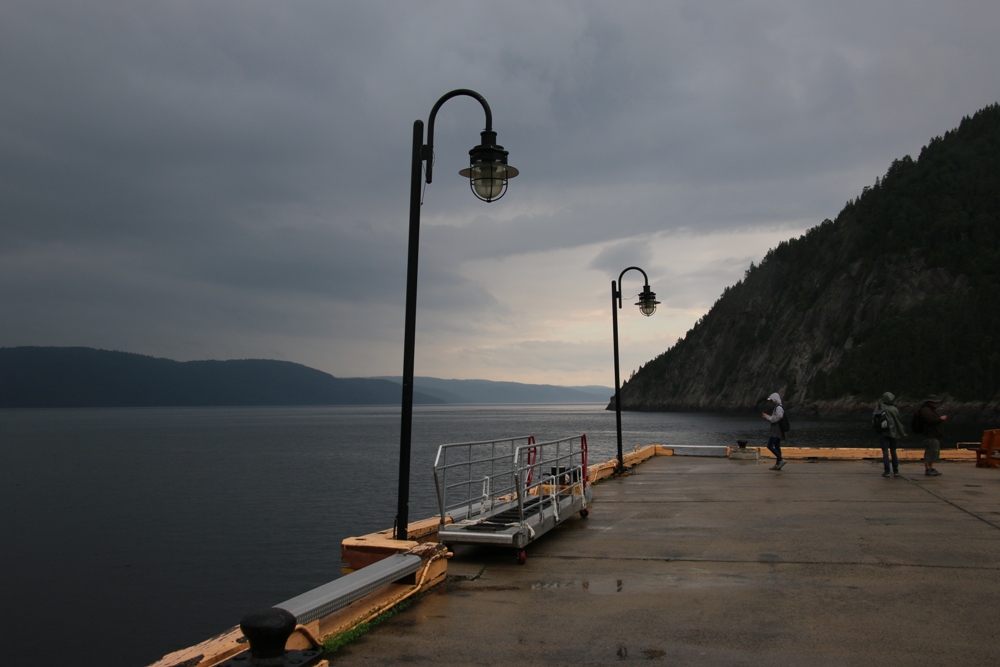 It is by the way a great spot to book a day trip on a boat to see the fjord. Being aware of the fact that there were a few more hours of driving ahead, we only spend an hour there. Getting back to our car my hubby noticed, that there was quite a bit of abrasion on our rear tires. For safety reason he decided to drive slower, meaning only 80km/h involving to calculate even more time to our planed stop over at Baie Comeau.

As mentioned in the first post about the trip, stop overs were planned to be at B&Bs etc. We were looking forward to it. Bought some wine, bred & cheese for dinner and some goodies for the girls. What happened when we arrived, was far from any expectations!

When I stepped in to register us and get the keys, the sight which presented at me should have been a warning!

To make each other understand he asked one of the guests to translate. I asked him to be allowed to talk to my hubby. When I came back one minute later, he told me, that he is not willing to give us any room and that we can go and find something else! What the heck was going on here? Resulting the long day, the circumstances with the car, hungry and tired kids: I lost myself control and started crying. I asked him if he was serious to kick us us at 9pm with two small kids. He said yes, he is the boss. Thanks to the guest who told him, not to kick us out we were allowed to stay. We scraped all our cash money together, payed and got the keys.

I remember this situation like it was yesterday. I still can feel the anger and helplessness while writing about!

We grabbed the most important things and went upstairs. Entering the room, I started laughing – the ironic kind of. This house wasn’t only owned by an unsympathetic emperor, furthermore it was a great example for bad taste! 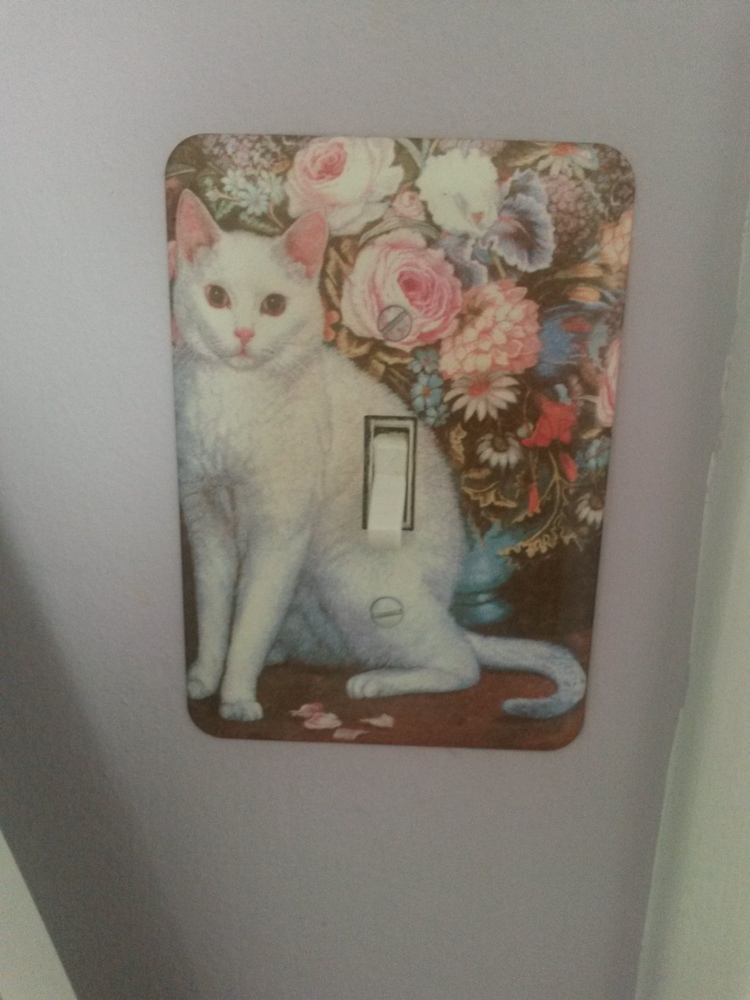 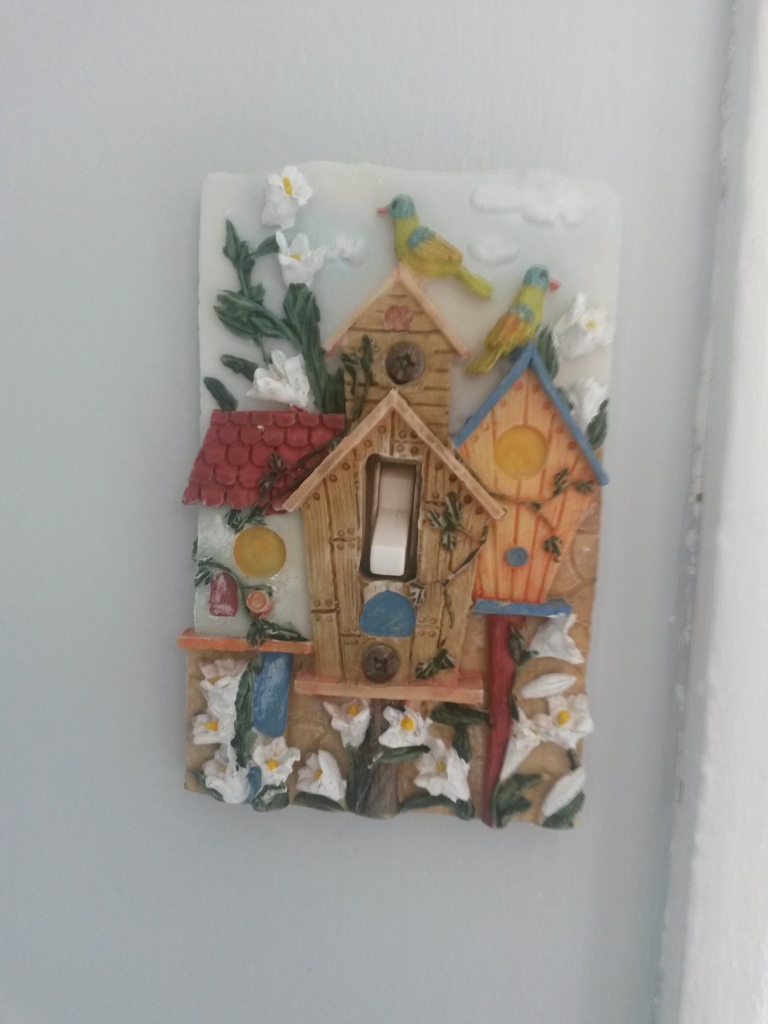 The house was full of these things. Cats were everywhere: in form of plush toys, ceramic figures, bed linen, blankets, light switches and table covers. So we named it, the cat house! We had a quick zip of wine to calm down and took the chance of having an extensive bath. Afterwards we built a bed for little J. Made of pillows and blankets on the floor. Remember we paid the full price for it! I am a positive person, that#s why we took it as it was – an experience!

Believe it or not, there is something good to say. The breakfast (only served from 7-9am) was delicious. He made fresh crepes, served with eggs at your taste, fruits and homemade jam. Little J got at least something for her money. The B&B provided cute small paper cups for teeth brushing. Big J liked them so much and I figured out that they had the perfect size for shots, that we reimbursed ourselves and got some souvenirs.

Right after breakfast we drove to a garage. Safety comes first. Suspecting the worst it was no surprise that we would need new tires. They had them in store, so we calculated 2 hours waiting time. But that was not the end of the story. The car was loaded up to it’s limits. To help it surviving the trip without getting another pair of tires it needed some adjustments. Long story short. There were a few pieces missing, which had to be ordered in Montreal! Bang! Click click click – yep that meant another night in Baie Comeau. Hoping the pieces arrive with the night express and the car could get fixed the next morning. 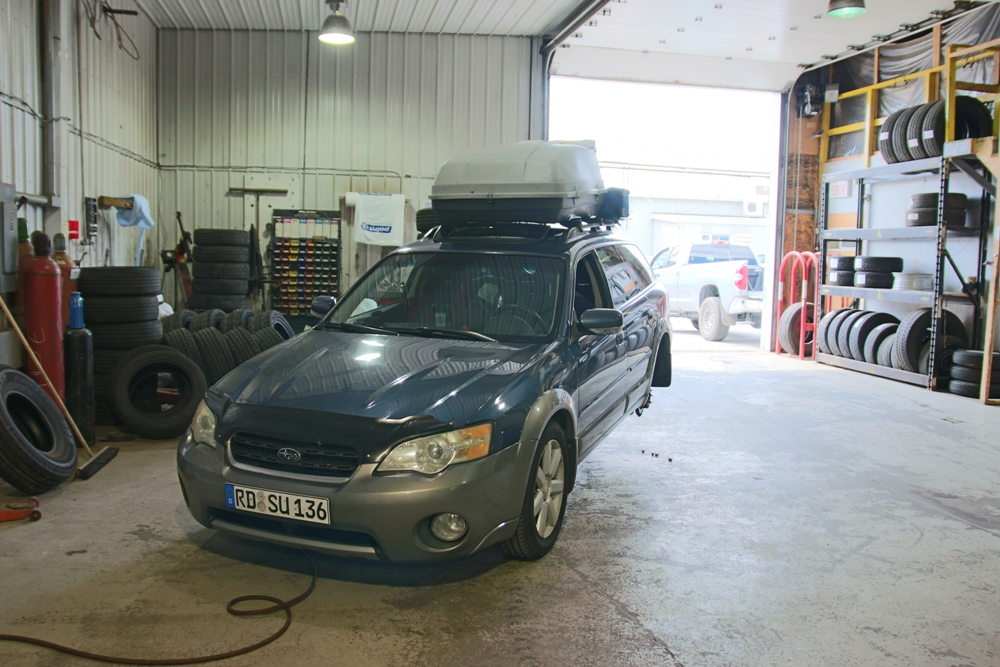 One more night here, results in less time in Mingan and that we have to strike of Natashquan from our list. That sucked! Going as far North-East where the paved road ends, was the goal. The original idea behind the whole trip! We were really sad, when we realized it. As a parent you don’t play with your kids life!

My other half really thought about cancelling the trip to Mingan or even go back!

Giving up – me? No! I am one of the most optimistic person I’ve ever met. I will find something positive in every misery. The sun is shining even while hiding.

So we took a deep breath, shacked the bad vibes out and focused on the next steps! Bob, one of the managers, was a total sweetheart which helped a lot! He was a family guy and empathized with us. He gave us a list of hotels, campsites, things to do and the most valuable – flexibility. He made it possible that we could have the only company car for the next 24h. He put on gas and even left a little gift with a warm note. Bob made our day!

Having a look online we booked a room in the best house in town – Hôtel le Manoir Baie Comeau . We were convinced that we deserved this after the cat house and the big bill to come. I needed to be alone for a while, so the other three Js went out for a walk and collecting stones. For dinner we went into the restaurant inside the hotel. It has an giant terrace with amazing views over the Saint Lorenz River. 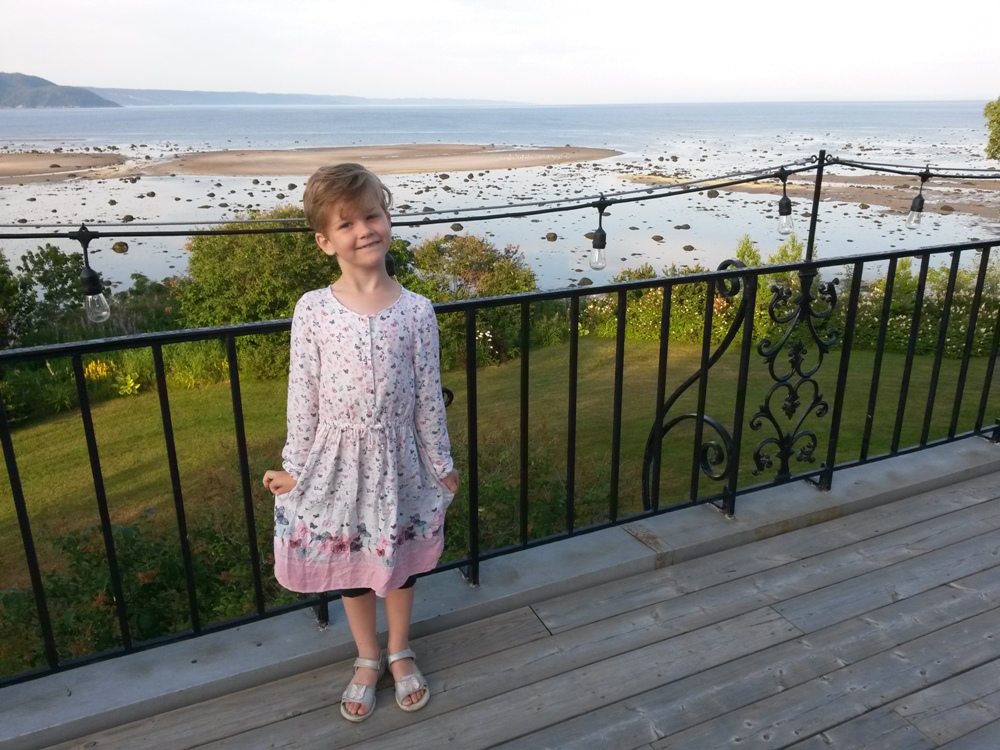 A delicious dinner and a relaxing Mojito later, we were in a positive mood again. On top the sun was spoiling us with an amazing sundown! Or was it just the side effect of my Mojito?! 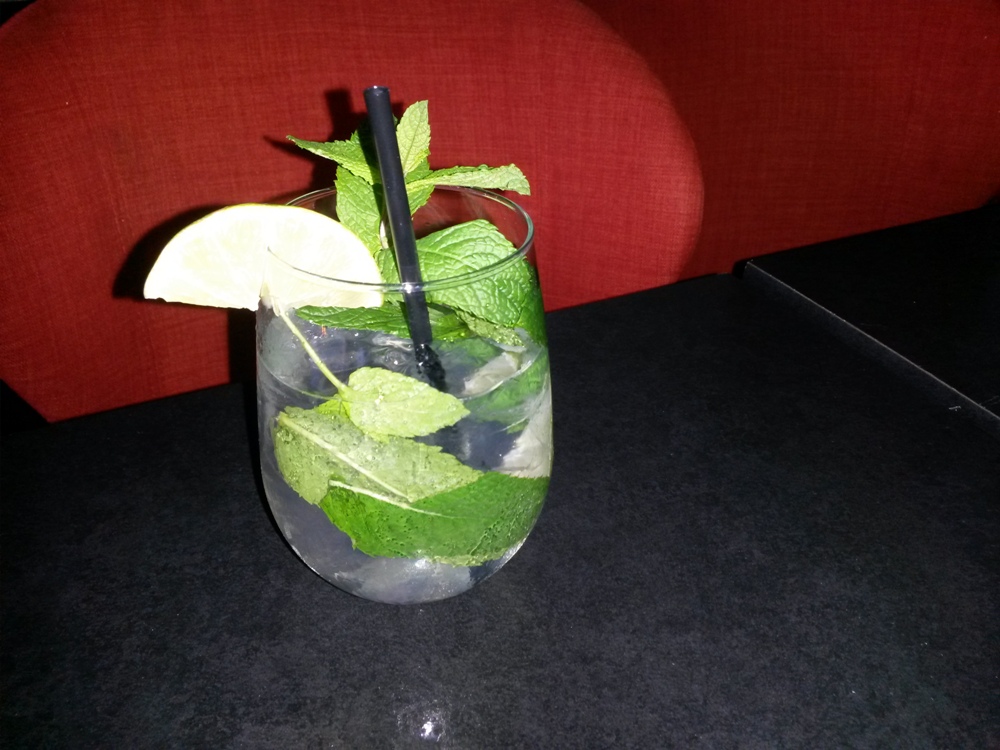 If you believe in good, good will happen!

The next morning we felt as good as new. Took „our“ car to cruise around and having some brunch. 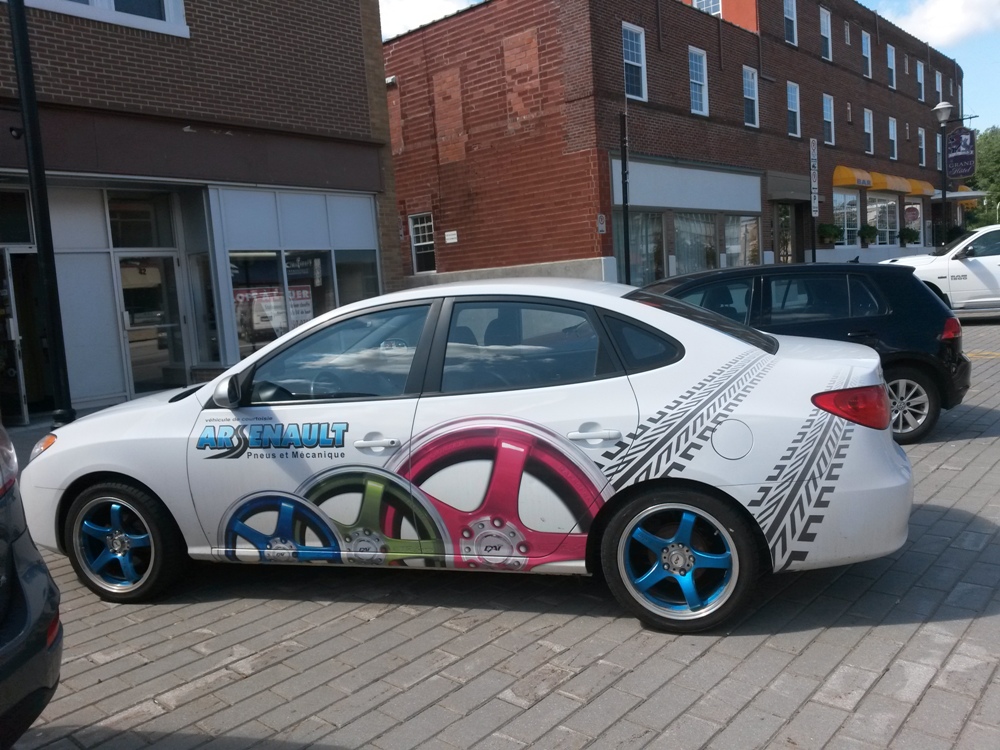 We found a cute coffee shop not far from the hotel, it’s name was „le Manoir du café„. The brunch was great, as much as the coffee and the hot chocolate! On time we got the call that we can pick up our car! A weight dropped of! So we drove there, payed the bill and headed direction Mingan.

I could feel, that my better half still wasn’t happy about our loaded car. We talked and he admitted that he would prefer to buy a small trailer or store some of our equipment on the way up North. Caused by that we stopped at a few car dealers and stores. Sadly we couldn’t find anything. We knew we anyway have to come back to Godbot after Mingan to take the ferry to Gaspesie. I figured out that the campsite  „De la Baie“ at Baie Trinité was close enough to Godbot, but still surrounded by nature. The plan we had was: Asking them if we could store the whole camping equipment and in return we would stay there for one or two nights when we come back. Luckily they said directly yes!!! The vibes got brightened immediately.

The fact the car broke and we had to add a day caused a lot of rebooking, cancellations and phone calls. Luck was on our side! Nobody charged extra fees nor charged for late cancellation! After all we were so much looking forward to get to Mingan and enjoy this almost unknown region.

This post was not planned. But beginning to write on part 3, I felt that I have to consecrate this situation it’s own post.

My goal is to encourage you to travel the world with your kids. That means also to be honest with you about failing or bad experiences. We grow on it! Traveling always brings the potential risk of things going wrong! That’s life! Allow yourself to be upset, shout out loud! As long as it is only about money and changing the schedule, you will find a solution. One, which will help you to go on traveling instead of giving up. The only regrets you would have are the ones about a missed experience, not about the money you lost.

Memories are not meant to be bought, they are made of action!

With this in mind, let’s go and plan your trip.