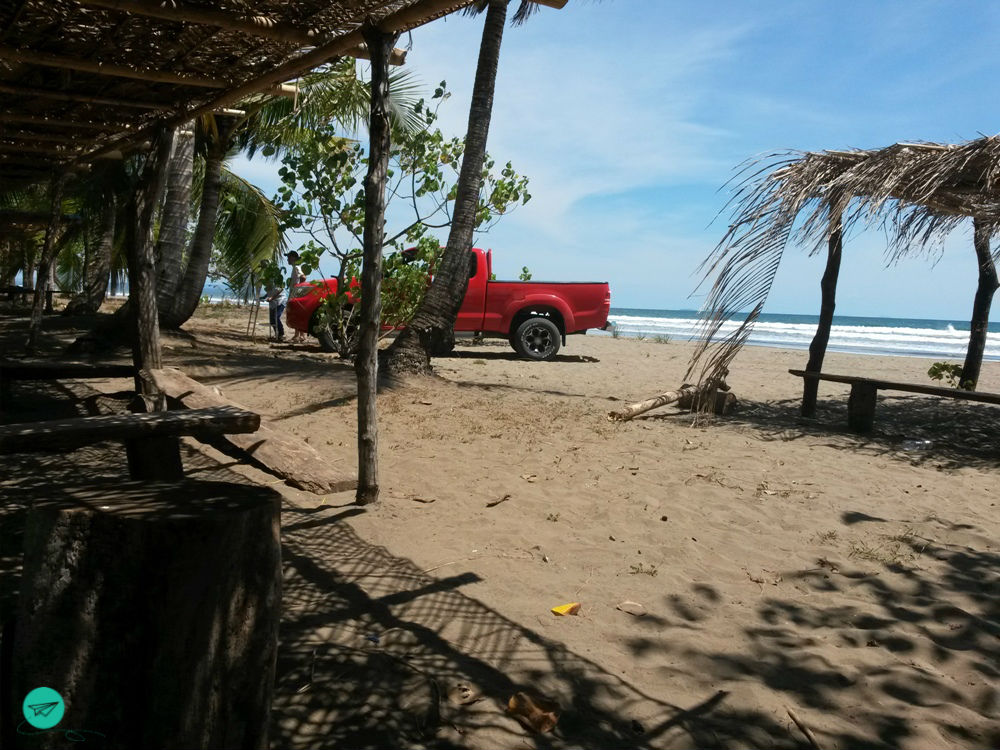 The last act – from Pacific Coast to Panama City

From Boquete to David 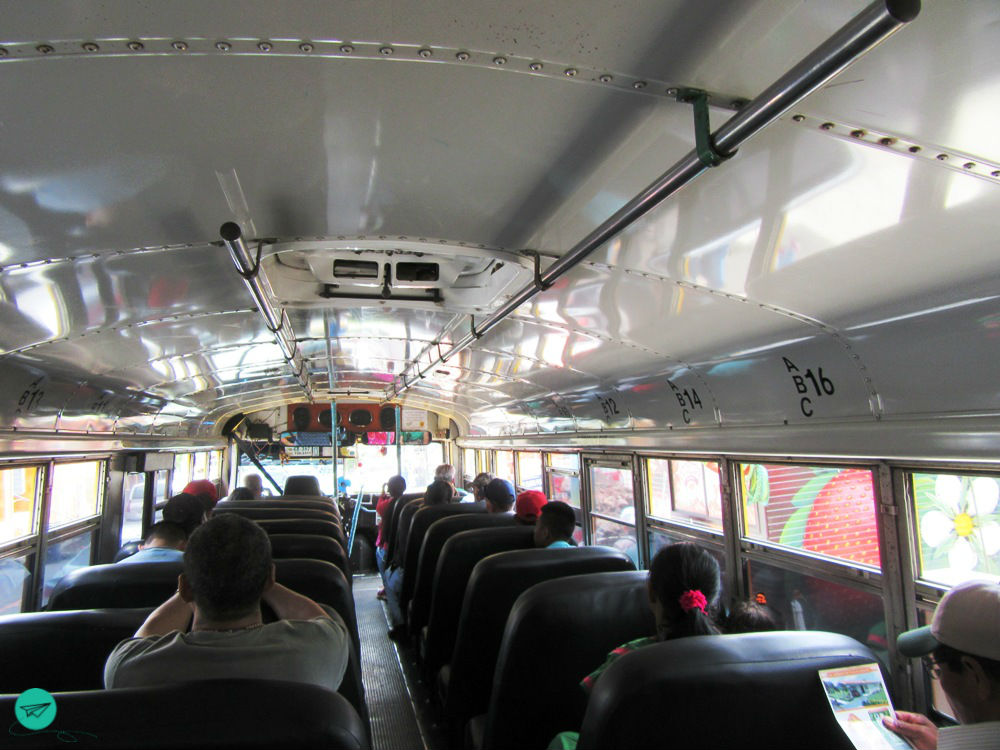 We left Boquete with a local „chicken bus“ direction David. David is close to the Pacific Coast. It is not known for being nice, vibrant or historical. The charm is industrial, but one of Panama’s main bus stations and an airport makes David important for a trip. Despite everything, we decided to stay 2 nights to see the Pacific.

Arriving in David, we needed to go to our rental car station. I asked around, but nobody seemed to know which bus would go there… So we ended up taking a taxi, negotiating the price of course! Happy and full of energy we got there (of course the buses stopped closed by) and were looking forward to get our car. But ups – there was no car? What? No car? I had to take a very deep breath to not yell and scream at the clerk! It was almost lunch time and pretty hot. At least in front of the station was shade. Kids and hubby took a seat and made themselves as comfy as possible. 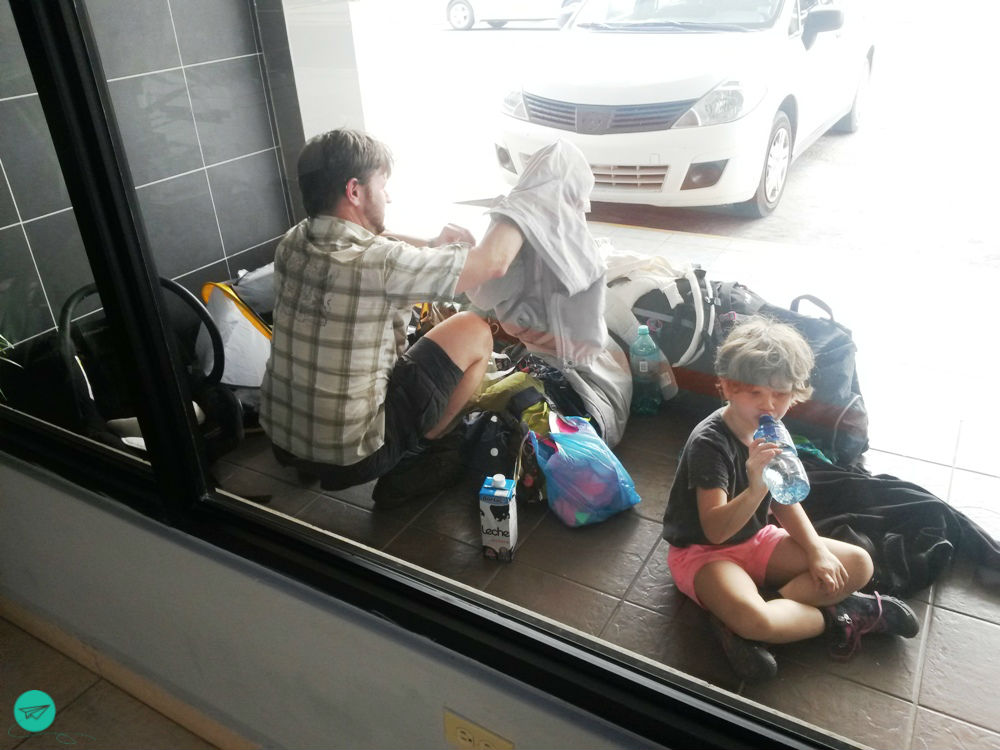 I stayed inside and made him work! Luckily my Spanish is pretty good, so I could arrange everything. He told me, that this might happen when you don’t book directly with them. It doesn’t matter if they send me a confirmation mail, that doesn’t mean a car is available at their rental station!!! I asked for the reason: people just don’t bring cars back on time etc. What bothered me most and made me really furious was his attitude. He didn’t put efforts on helping us! Long story short. I made him working! An hour later we had a car. First stop – restaurant to fill our empty stomachs. Second stop our hostal, „Hostel la Libertad„, better name couldn’t be chosen.

The hostel was simple, clean and spacious. The owner and his wife friendly and he provided us with all needed information where to find the next beach! 60 minutes later we jumped into the water at Playa Barqueta. Indulged ourselves with fresh fish after at the only restaurant „Miramar“, went back and slept like babies.

The next day we planed to discover another beach, called las Lajas. What should I say? We were overwhelmed. A super large beach. Water, waves and sand as far as the eye can see! This beauty of a coast almost only for us. Shady shelters below the trees. Seemed like we found a peaceful, relaxing place to spend the day! 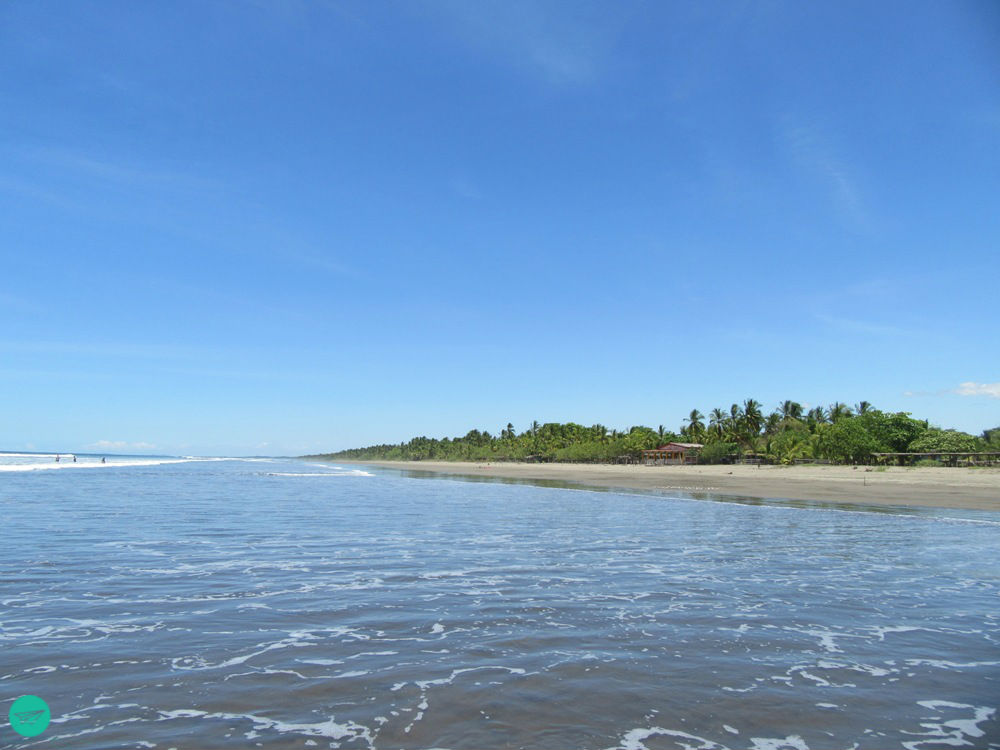 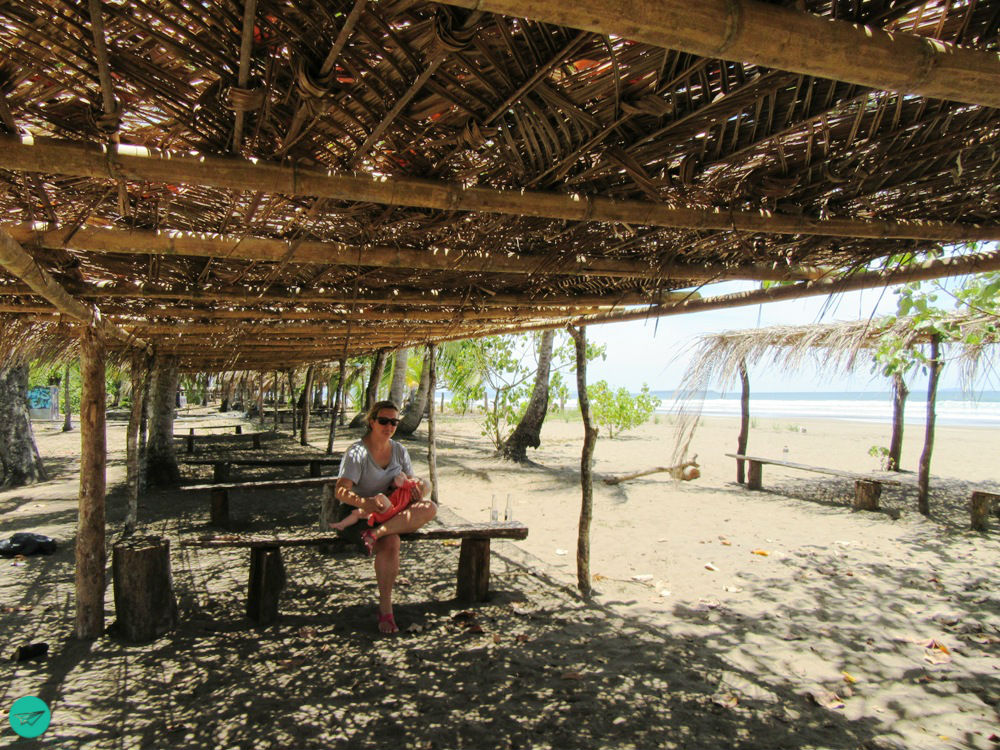 Can’t remember how many hours we spent there. Time appeared to stand still. Going back and forth between shade and catching waves. Collecting cashew fruits. -Did you know Panamanians eat the fruit and not the cashews? They leave the best part of it, in my opinion.- At one point the inevitable happened – we ran out of food and realized that we are hungry like wolves. So we packed up and went back on the road to find food. Surprisingly there were a few restaurants in this area and we had a big platter with fries and fish! Satisfied and suntanned we drove back to the hostel and had a relaxed evening with a drink and a nice breeze.

Panama City with all it’s facets

Next morning we brought the car back and lined up to get a seat in of the buses to Panama City (PC). Estimated travel time 7 hours. The kids did great, besides bothering because of being bored. HA HA  They only showed an action film and it was super loud. My hubby didn’t like the driving style and little J didn’t sleep as much as we hoped, but hey we survived and we knew we would. The reward at the end of the day was our hotel suite. I knew I booked something good, but I didn’t expect a suite as big as our apartment back home. Everybody Happy!

Strengthened by a breakfast at the 26th floor, we took an uber to go to casco viejo. We had no plan rather than to find a coffee shop we got recommended in Boquete. Strolling around and trying to catch the spirit of this beautiful place full of colonial style buildings was all we did. Every now and then it is just nice to drift along to turn right or left, to stop and rest or set in somewhere without a plan. Casco viejo convinced with it’s charm, ruins, renovated houses, it’s colonial historical flair and tranquility. A mix of modern lifestyle and past. You find yourself in another world compared to the rest of the city. But have a look: 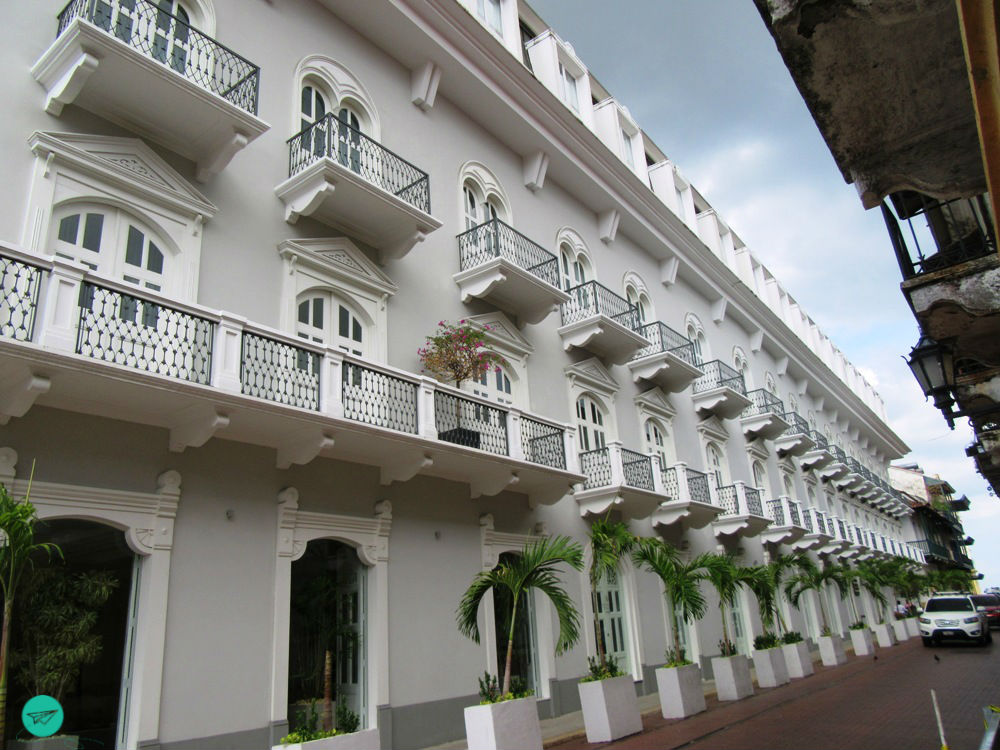 Taking a seat at one of the roof top bars or restaurants you can see the skyline of the „other“ PC and you’ll feel even more in another world. At least I felt like this. 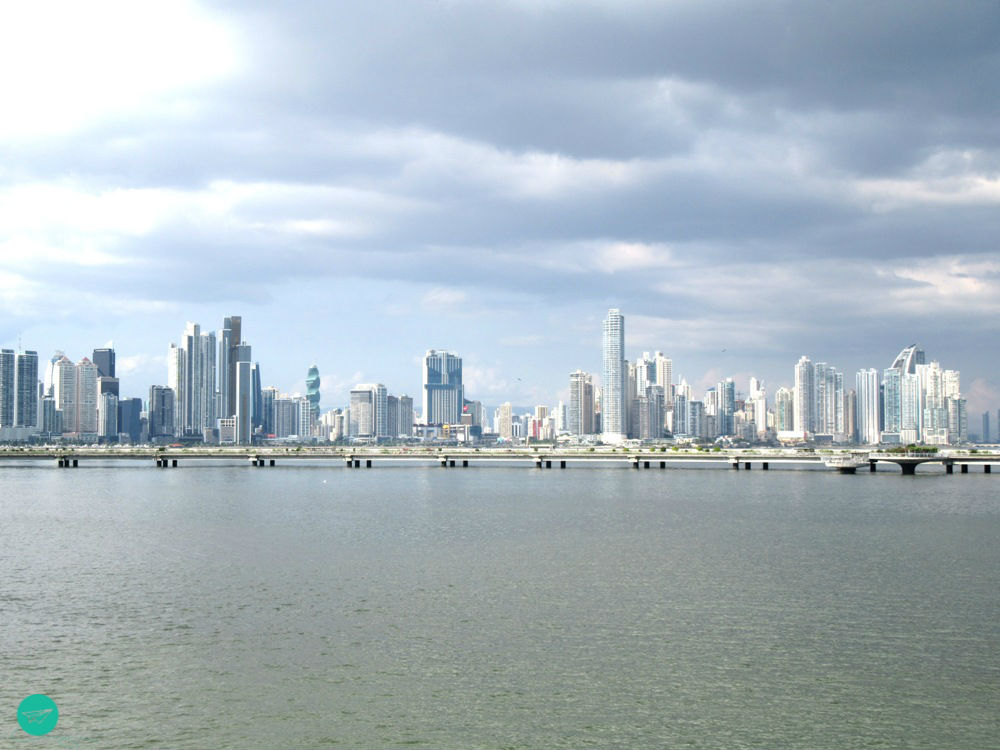 I am sure, that if people don’t know Panama yet, they at least have heard about the Panama Canal. This is one of the major construction miracles of its time. Finished in 1914 it connects the Pacific with the Atlantic Ocean. This Canal is impressive! You don’t need do be very much interested in shipping, to come here and be impressed of what you will see. Honestly we almost missed our chance to go there and I would have regretted. Finally we booked an uber again (one of the fastest and cheapest ways to cross PC – local buses are a disaster). Our driver waited for us, while we did the quick round.

First we visited the museum and it was super interesting. Toddlers won’t get bored. At one of the floors they even have a simulator where you can pretend to be a captain! Really, really great museum. The last step is the observation deck. This is where I got amazed! I have seen big ports and canals before, but this one for sure surpassed my expectations. Like the whole tip luck was with us and we witnessed more than one ocean giant passing the canal and it’s locks. Incredible on how precise those giants pass the „bottleneck“. If it wouldn’t have been closing hours, I would have watched this spectacle for hours, over and over again. 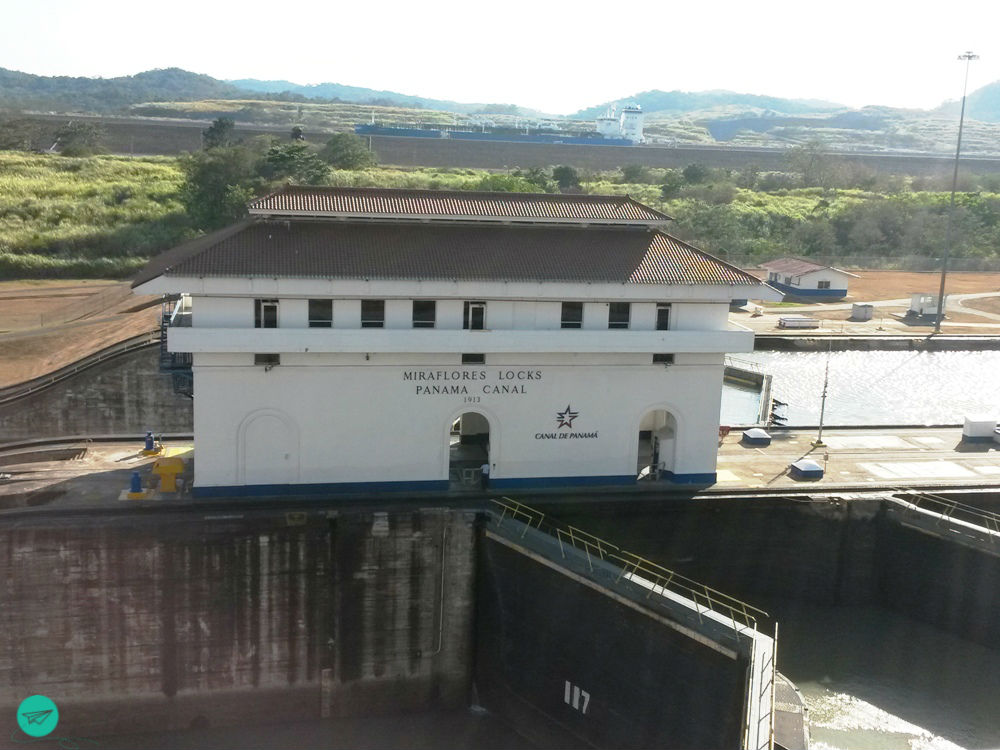 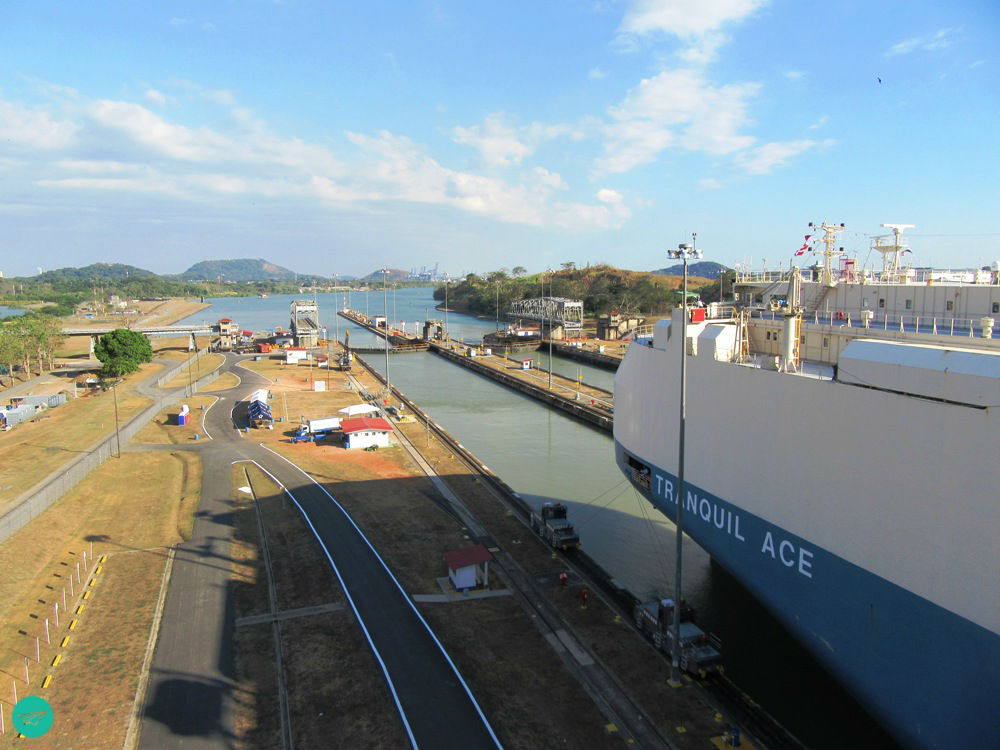 Nice name for this giant though, right?

This was the last act of our great trip through Panama and Nicaragua. We had incredible great time. Learned so much, grew together as a family and are thankful that we had this opportunity! Littel J started solid food a bit and big J somehow realized that travel is a privilege. A very important lesson I think. I am sure one day I will return!