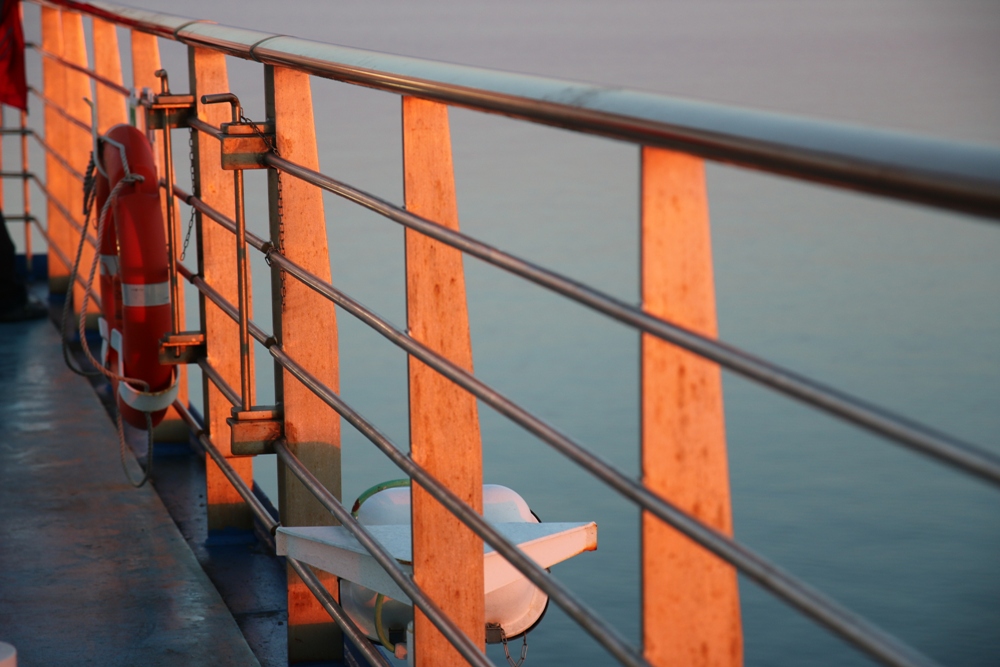 Getting the ferry to Gaspésie

Leaving Mingan involved a smiling and a crying eye. Now looking back we might should have extended instead of following the plan. But as usual ones is wiser after. Driving down the coast line was spectacular. I loved what I got to see. The targeted destination was PEI. I will skip this, as it is not Quebec and we „only“ went there to enjoy some sunny beach days. 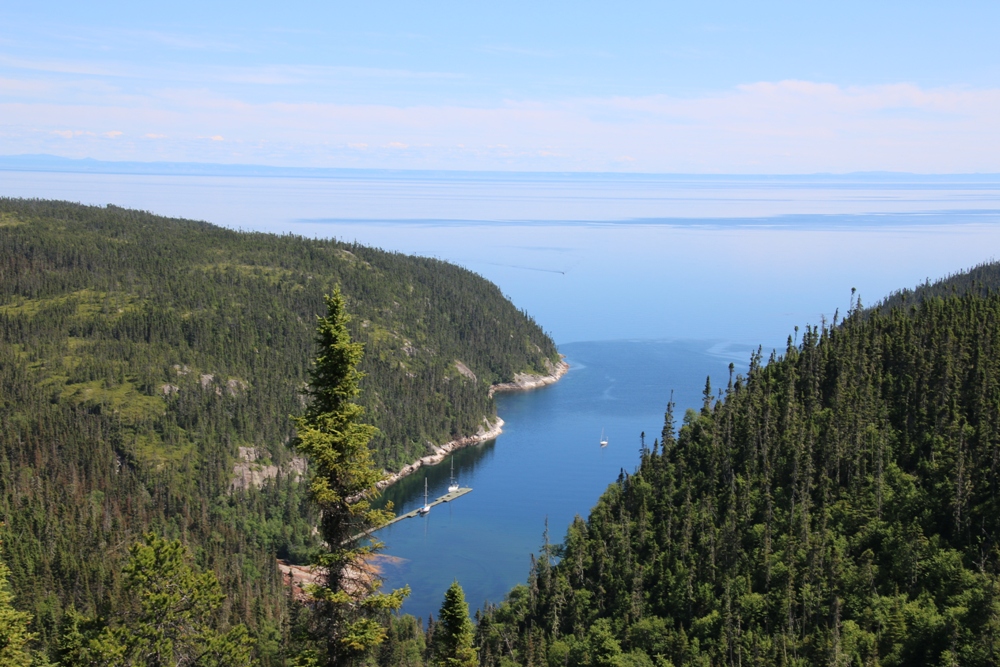 To reach Gaspésie driving down south-west you have two possibilities Godbout and Baie-Comeau. Our first choice was Godbout as a result of all the changes we had to make we canceled and booked the ferry from Baie-Comeau to Matane. The operator is Traversiers. I highly recommend to book in advance especially when you have a trailer. In peak season you might have to even add an overnight stop like us.

As an attentive reader you know we had to stop at Baie-Trinité to get our camping gear and had a layover there.

Anyway we caught the ferry at some point and had a fantastic crossing with a stunning sundown. This ferry had it all: kids play area, bar, restaurants, TV area, relaxing seats, a few outdoor areas and the view. We felt like being on a big ocean liner. Here is the recap in pictures (line up, on board, sundown). 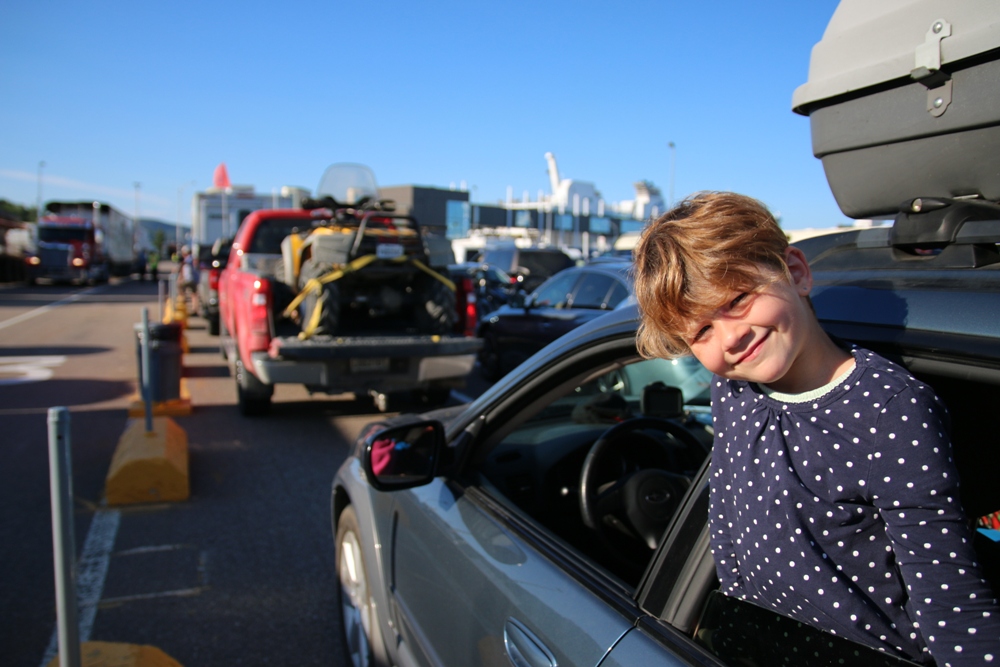 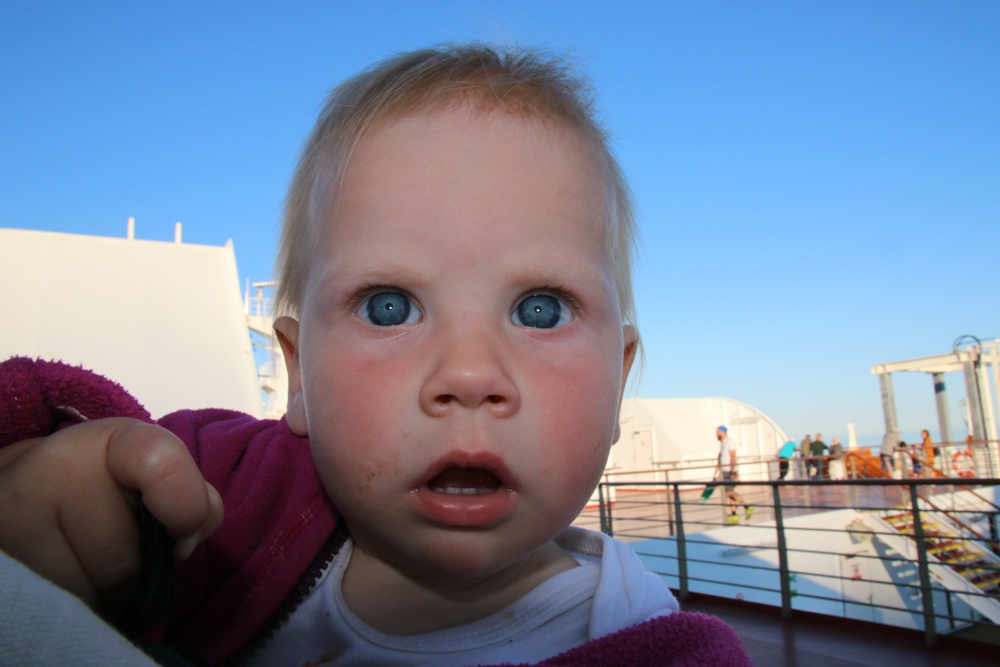 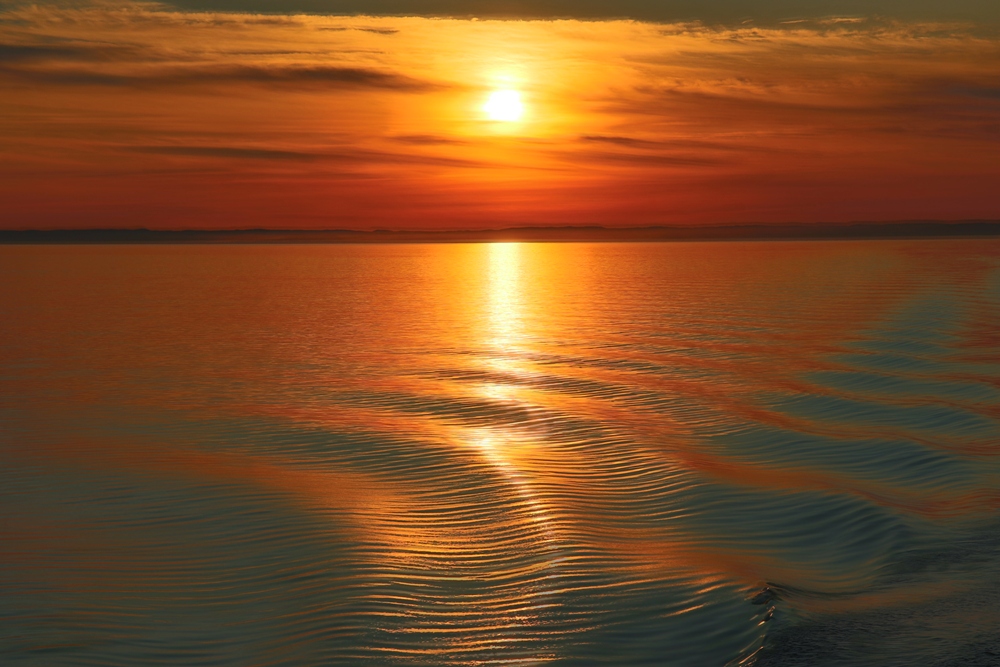 For the stay at Gaspésie we rented a house in a small community called La Martre. It is close to Sainte-Anne-des Monts. Here we were expecting some friends visiting us from Germany. They arrived on two consecutive days so the first 48h we enjoyed ourselves, celebrating the reunion, sitting at the fire and chatting for hours.

The house is located on a hill so we had a great view. One angle the lighthouse, straight forwards the sea and the trees behind. 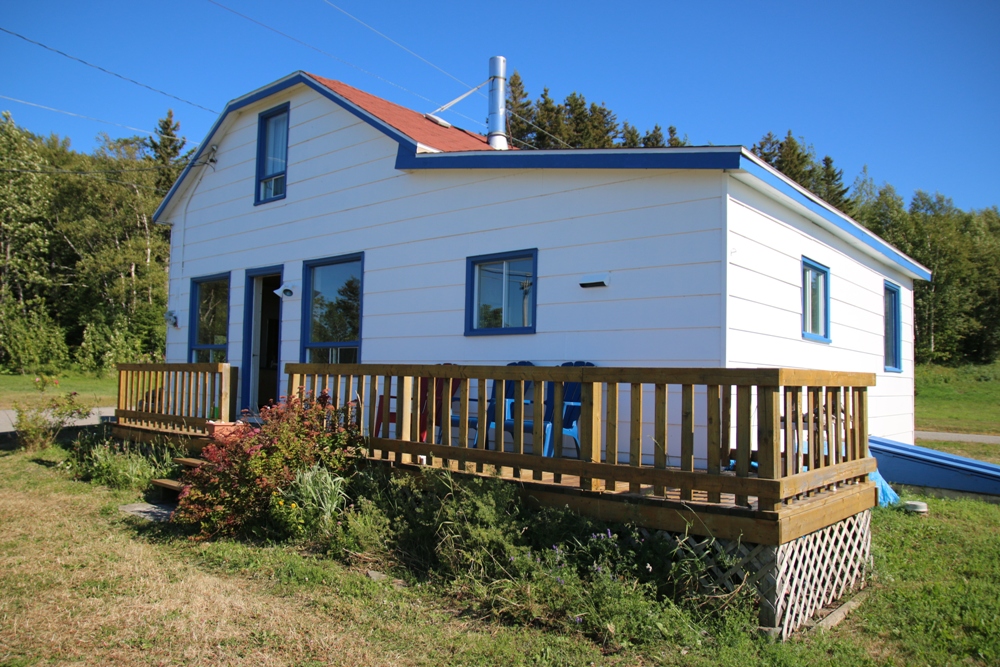 Meeting old friends never gets boring. Not even when you stay at the same place for two days and one is only leaving for groceries. It felt good to have a bit of „home“ here. Lucky us the kids got well along, too. Yes they were in a battling half of the day, but the other half they loved each other and played well.

A day in Sainte-Anne-des Monts

Combining the interests of two toddlers, a baby and 6 adults was quite a bit of a challenge, but we managed. We went down to the little marina of St-Anne-des Monts for a walk. Hanging around and watched the sea.

At some point somebody shouted: look whales over there! Everybody ran closer to the shore to get a better view. All where quiet and fascinated and observed the whales. Taking pictures and being proud of spotting them.

About 20 minutes later we started wondering that our whales were still there almost at the same spot. Slowly but surely it dawned on us that we must have fell prey on an illusion. And so it was. It were only stones we were watching. We laughed so much, that it became our running gag for the whole trip. Did you see a „stone whale“ today. I have to admit that it was foggy. This is the original picture I took with my smartphone! Not the best, but gives you an idea of the fog. 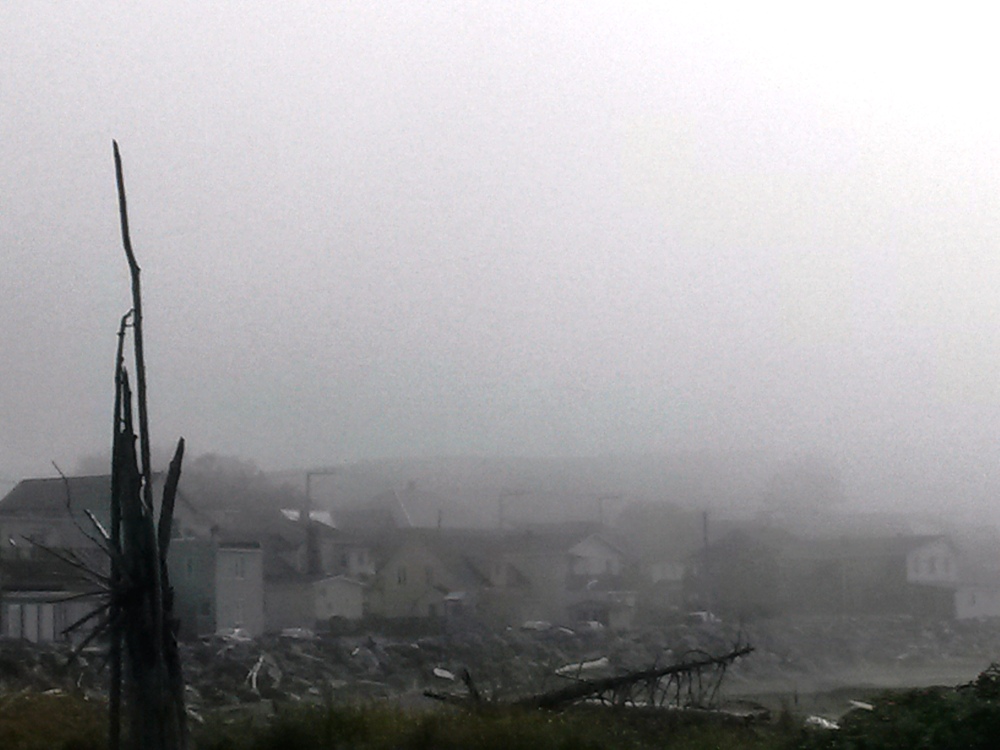 As soon as the fog came it was gone.  We went to the Exploramer a sea life discovery center with Aquarium. The kids had fun. We were disappointed. It was very small and we expected more to see (for the price we paid). At least the stuff was explaining a lot to the kids and there was an area where they could held some of the animals under supervision. When we got in we decided to book the full package including an one hour trip on the boat to learn more about crabs and fish of the area.

So we became fishermen for an hour after we finished inside. The kids were very excited, the sun was shining so it only could get better. The biologist was very knowledgeable and explained a lot at an perfect children’s-level. First time we all had a living crab in our hands (they all went back to the water alive). 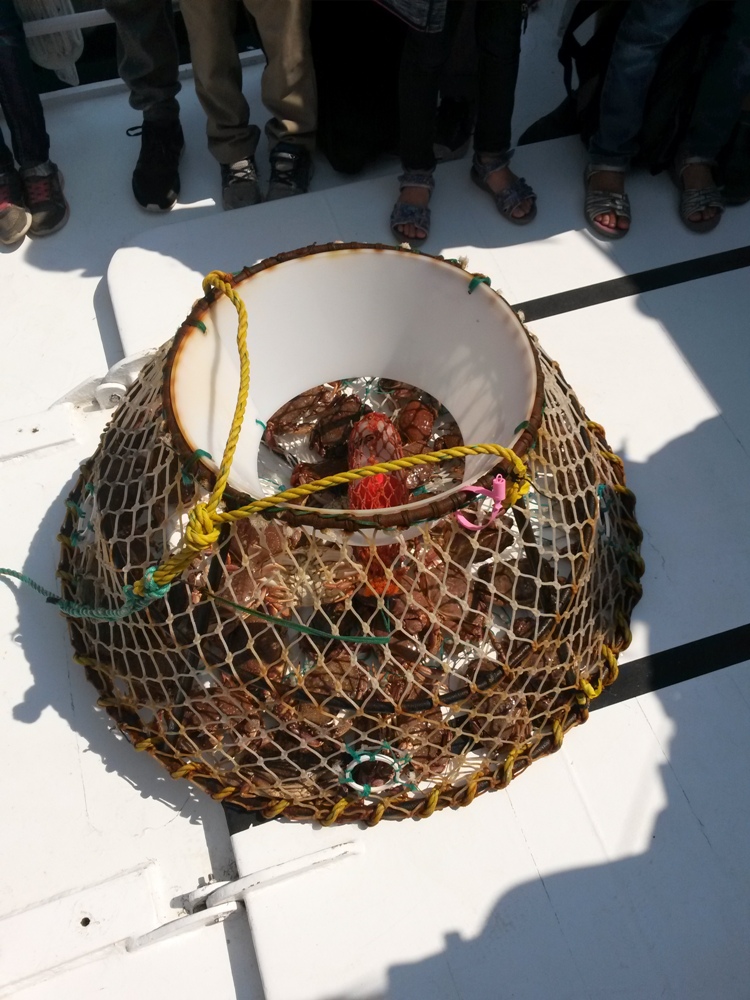 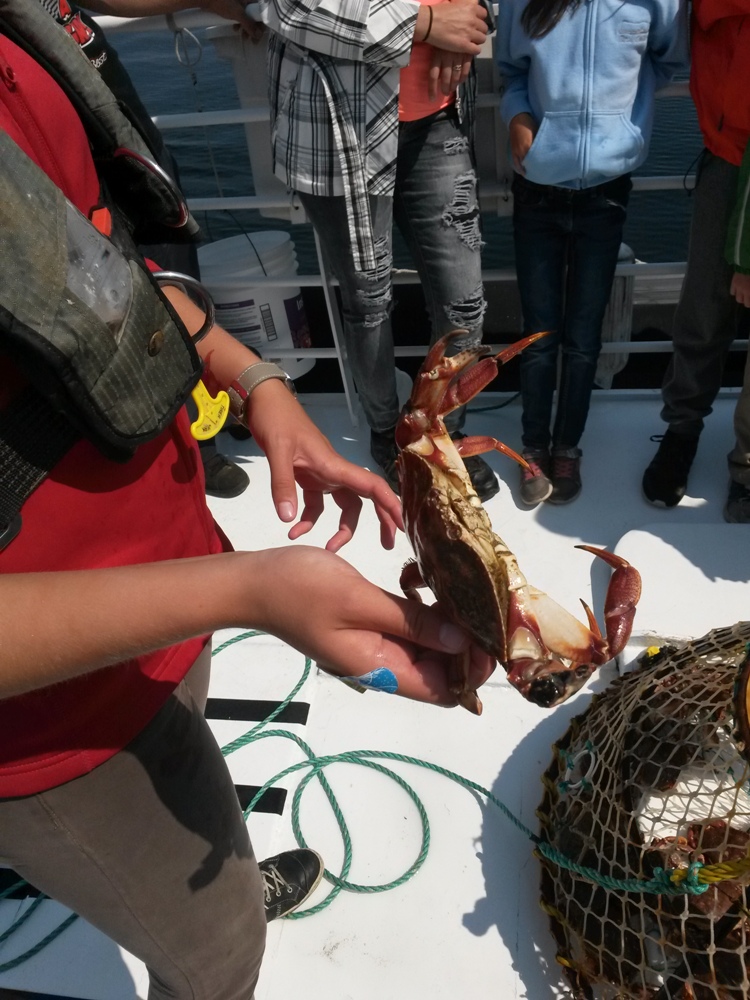 Big J and her friend enjoyed the tour and me, too. More regarding the fact that I am on a boat, but anyways. Afterwards the „herd“ followed the recommendation of the house owner and went to a little bakery or better patisserie called 4poches. Spoiling ourselves with great coffee and delicious pastries. We stock up on European bred and drove back satisfied. 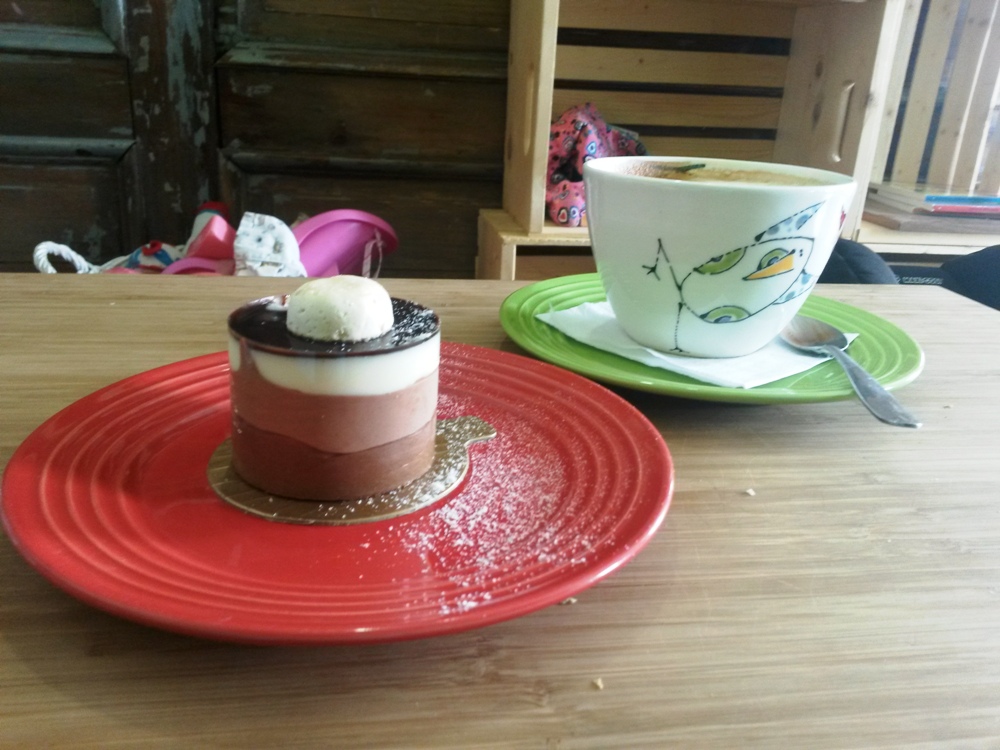 The next day the whole gang left for a new adventure: Mining. Our destination was the Mont Lyall Agates Mine about 30-45 min drive. None of us had ever done it, so we all kinda curious.

Getting there is not so easy as street signs in Quebec are neither well positioned nor accurate. My advice driving down from St-Anne-des Monts via route 299: you have to slow down when it says Mont Lyall in … km. There will be no other sign then for Murdochville (the ghost city of Gaspésie) after a couple of hundred meters! This is your direction then. The road is not paved and when you have to turn right for the mine it is getting worst, so slow down unless you have a pickup or SUV. In a camper you won’t manage, to steep and narrow.

At the mine you have special areas and different options. How much you collect for them, how many stones you wanna keep etc. Only an Hour later the kids were done so we stopped the mining process, got back and let the stones cut. If you took a beautiful one or not, you only got to know after opening. 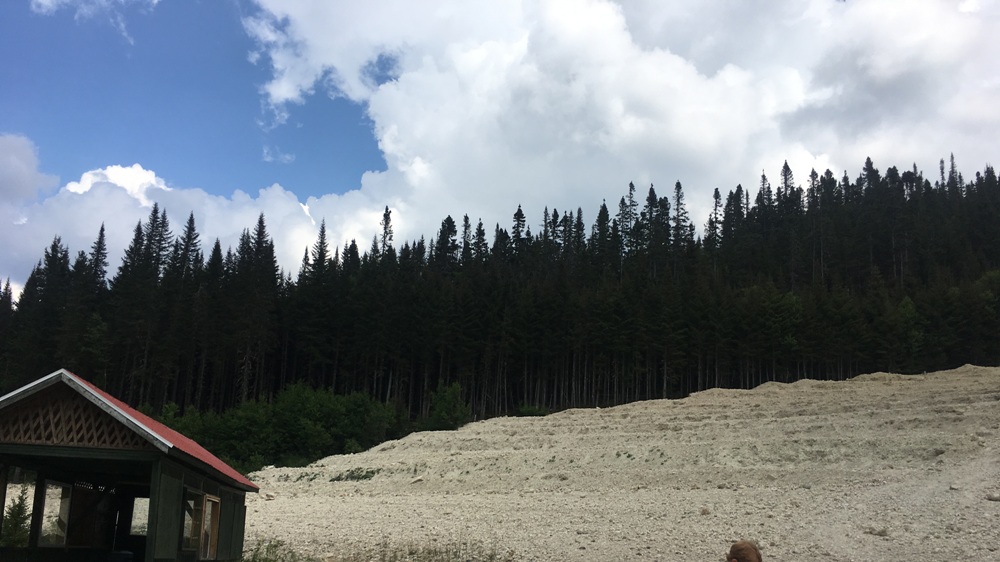 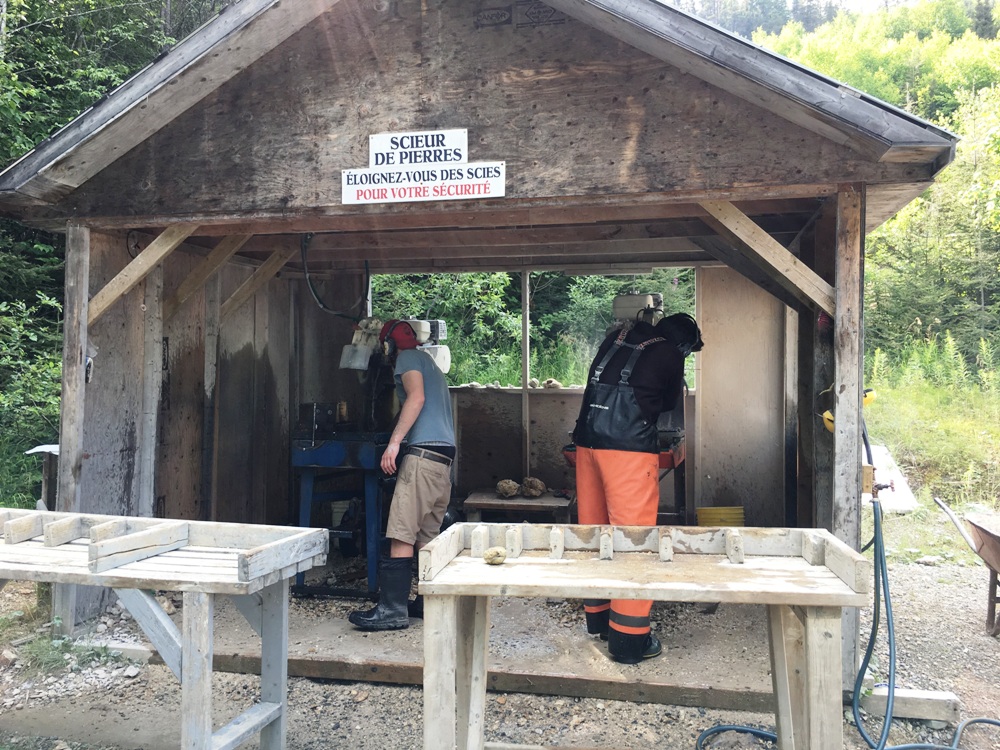 The day was still young  so we stopped along the 299 on our way back for a walk and a small Kneipp treatment. The toddlers and us had fun and enjoyed. The point we stopped couldn’t have been better chosen. The scenery was like in a travel brochure about Canada. A river and two fishermen in the woods and a small cabin behind. Two of our friends, Big J and her friend were brave enough to take a bath. Me and little J went for a small cool down, too. 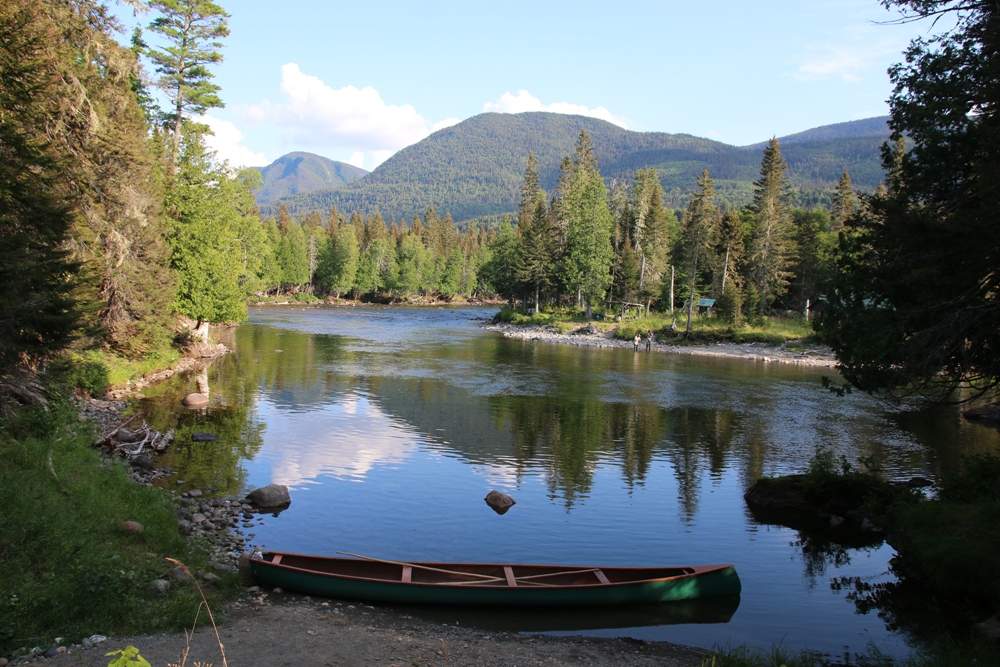 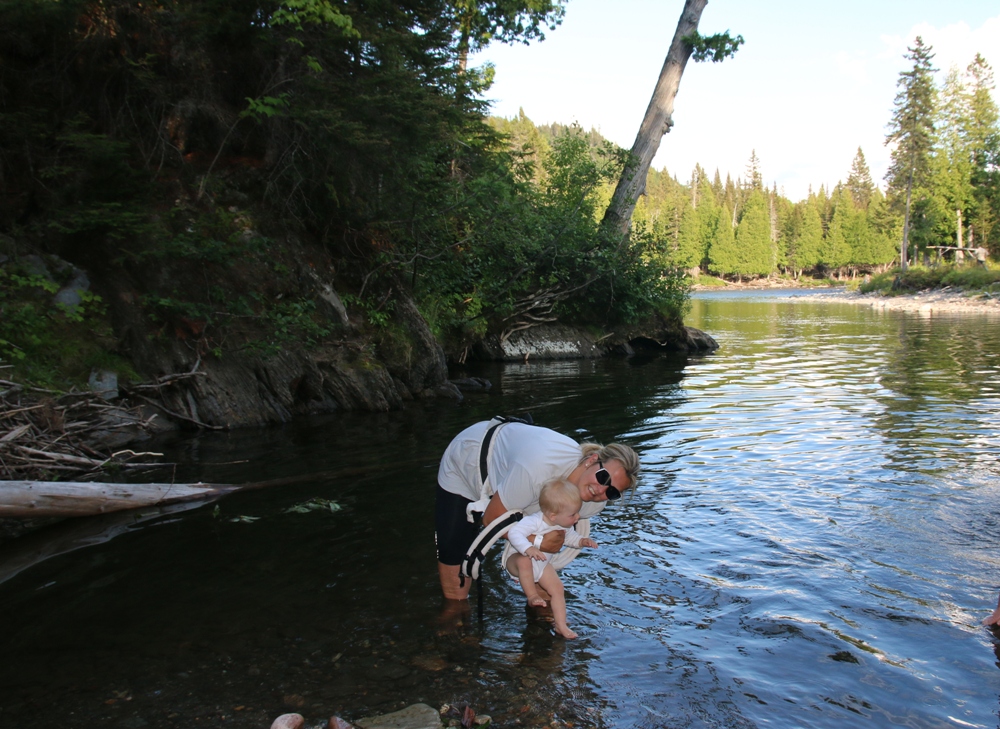 Afterwards we headed back and ended the day as usual. Dinner, fire, drinks and long chats!

On the trail of Jacques Cartier

The guys had decided they wanna follow the spirit of Jacques Cartier and hike up the Mont Jacques Cartier, the highest one at the Gaspésie National Park (Parc national de la Gaspésie). They took the kids and the family van and of course didn’t follow the ladies advice to take the regular way. Men like them love adventure.  To funny they never made it and had to turn and take the regular road anyway. No gloating, I am just saying.

Finally they hiked up the Mont Sainte Anne. The kids did a great job and the trails are very good and easy to hike with kids though. This mountain also is part of the Parc national de la Gaspésie. They had a fun time, stunning view, drank clear water, observed nature and celebrated themselves. While the women and the baby at home prepared for the leaving next day and dinner, of course. 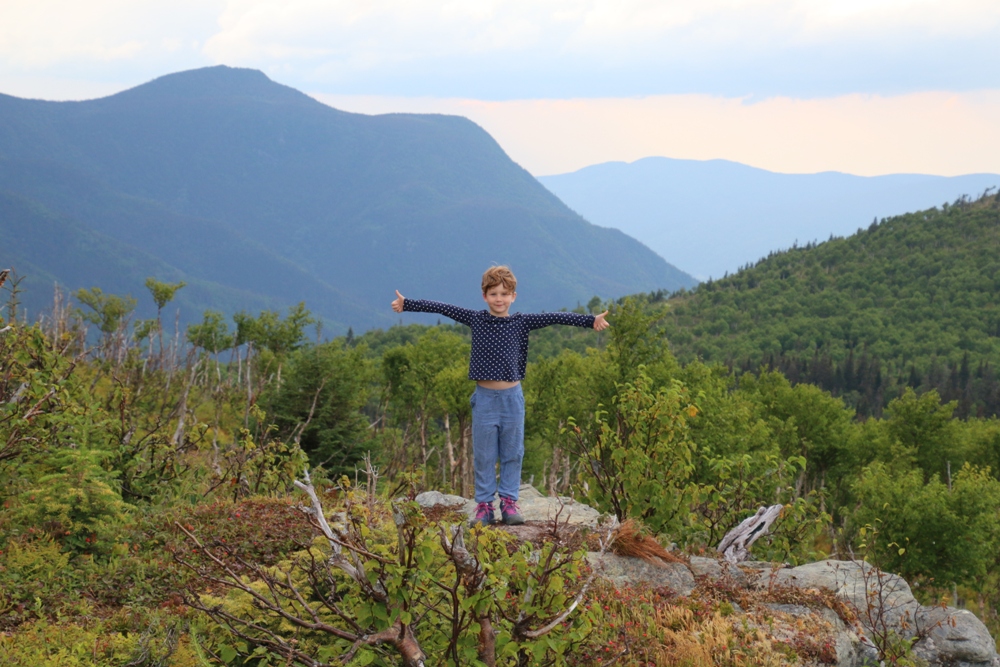 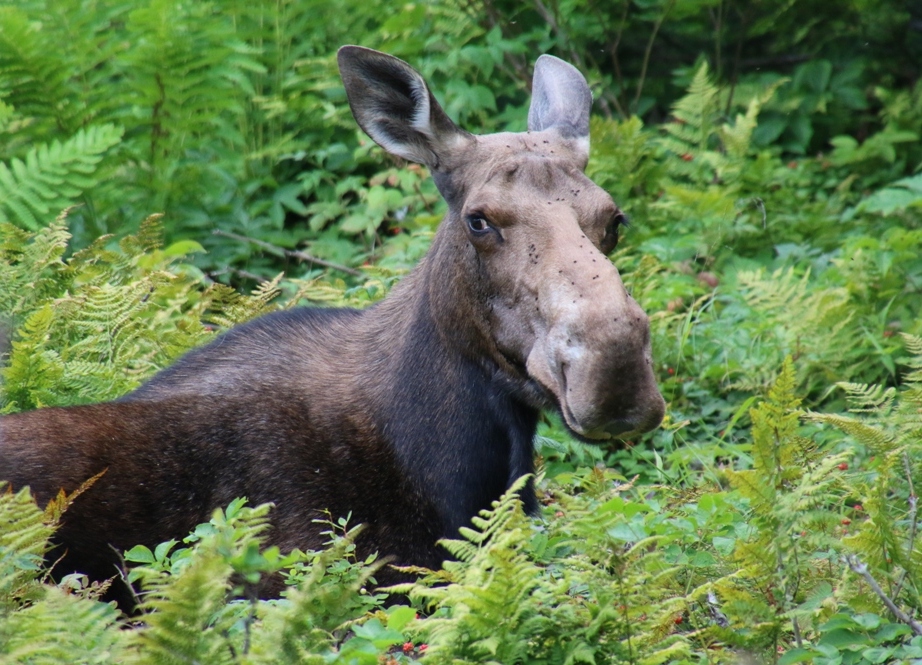 All in all I can highly recommend Gaspésie. There is so much more to see and discover. We easily could have spent 4 weeks there without getting bored. Lucky us we are close enough to come back soon.  Did I mention, that we witnessed the warmest summer in over a decade? Actually sun was with us all the trip so far. A trip to Gaspe you can perfectly combine with Nova Scotia and New Brunswick.